Ten Frame Race to Twenty - This was a partner game I created to help my kids get some practice counting to twenty. They rolled a number cube and placed that many counters on their ten frames. After each turn, they had to count their cubes and say: "I have ___. I need ___ more to get to 20." 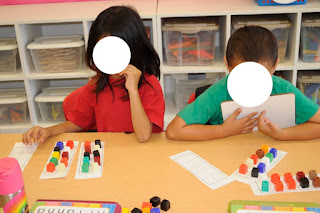 Race to Twenty - This game is great to help kids gain a basic understanding of place value. All you need is place value mats, number dice, and linking cubes. On their turn, children roll the die and place that many cubes in their ones column. They count their cubes after each turn to see if they can make a group of ten. Once they reach ten, they stack ten cubes together and move them to the tens column. They continue the game until they reach twenty (two towers in the tens column).

These little smarties decided to use a white board to record their scores!

Build a Number - For this activity, I held up numeral cards and the kids had to identify the number and build it on their ten frames with manipulatives. For more practice, I showed a tens frame card on the ELMO and they had to figure out the number and write the numeral on their white boards.

Human Ten Frames - This was SO much fun! I made two ten frames on the floor using tape. Then I held up a number and had the kids come up and use their bodies to represent the number in the ten frames. I didn't get any pictures, so maybe we will have to do it again.
Next Post Previous Post