Wow! This last month of school has been a whirlwind of craziness for me! On top of closing up the school year and getting ready for a big move across the country to NY, we've been displaced from our apartment for weeks due to a flood and mold issue...right in the midst of all our packing!! We leave on June 20th and I am soooo not ready! In other news, school is out and I am ready to enjoy Maui for the next few weeks before I say good-bye to this beautiful island! 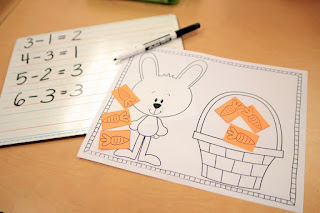 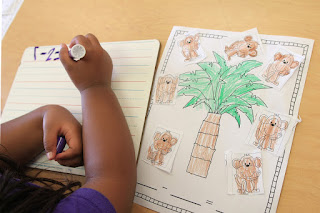 And as I promised way too long ago, here is some of the fun we had with subtraction. Better late than never!

We read Five Little Ducks and acted out subtraction problems using duck puppets. Then we used rubber ducks in a "pond" to model subtraction stories. I modeled with the ducks while the kids used orange cubes for ducks and blue construction paper ponds.


This lesson inspired an idea for one of my math tubs. I just filled one of the tubs with a bit of water, added some small rubber ducks (from the Walmart party favor section) and a recording sheet! They modeled subtraction problems with the ducks and recorded the equations on the sheet. They LOVED it! So simple to make, and it was definitely the hit of the year! Click here for the Duck Subtraction Recording Sheet. You may want to laminate the recording sheets and have them use expo markers to avoid making a mess!

We read The Tale of Peter Rabbit, then acted out story problems. In each problem, Peter would take some carrots from Mr. McGregor's garden. I didn't have any bunny ears, so I made some from construction paper and I printed out some large carrots for props. While some of the kids acted out the story problems, the rest of the class modeled the problems on their Bunny Work Mats and recorded the answers on their white boards. This cute idea is from Deeanna at Golden Gang Kindergarten. She is so creative!


Five Little Monkeys
We sang Five Little Monkeys and acted out subtraction problems with monkey puppets (ex: 6 little monkeys swinging in a tree, teasing Mr. Alligator, "Can't catch me!" Along came Mr. Alligator, quiet as can be and snapped 4 monkeys out of that tree). One student was the alligator and used his arms to "snap" the monkeys out of the tree. Then the kids used a tree mat and monkeys to model the problems. Finally, they colored and pasted their monkeys on their page to make a subtraction story for a class book. Click here for Five Monkeys Subtraction activities.

Pete the Cat
Do your kids love Pete as much as mine do?! We read "Pete the Cat and His Four Groovy Buttons" and then modeled subtraction problems using my Pete the Cat poster and some buttons. Then each student got a Pete Work Mat and some buttons. As I told stories about Pete losing his buttons, they modeled the problems and wrote the equations. This awesome idea was also adapted from Deeanna at Golden Gang Kindergarten. Have I mentioned how creative she is?!

We sang "Who Stole the Cookies?" and modeled subtraction using a big jar work mat and some "cookies." As one child took away cookies, the class wrote the equation on their white boards. Then, each child got their own cookies (Cookie Crisp cereal worked well for this) and a cookie jar work mat and recording sheet. I told subtraction stories as they modeled and wrote the problems. Fun and delicious! The kids wanted to take the work mats home so they could practice subtraction with their cereal in the morning! Love it! Click here for my Cookie SubtractionActivities.

Alexander Who Used to be Rich
We read "Alexander Who Used to be Rich Last Sunday." After reading, we used piggy bank mats and pennies to model subtraction. I used the kids' names to tell subtraction stories. For example, "Jenna used to be rich last Sunday. She had 6 pennies in her piggy bank. Then she bought a (child names an item) for 3 pennies. How much does she have left?" They had to model the problem with pennies and record the equation on the recording sheet. They loved hearing the stories with their own names! Click here for my Piggy Bank Subtraction Activities.

To practice subtracting one, we read this fun story about some monsters who play musical chairs. Each time, one monster is out! After reading and discussing the story, we played musical chairs! I had one table play at a time, and the remainder of the class watched and wrote the subtraction sentences on their white boards. Then we discussed the patterns we noticed in our equations (minus one, one less each time, etc). Then, the kids used these cute monsters from First Grade Best to cut and paste a "minus one" subtraction story in their journals.

We read The Cheerios Counting Book and then ate cheerios as we practiced subtraction. I told them how many Cheerios to put on their plate and then how many to eat. As they ate the cheerios, they wrote out the subtraction sentences.

Ten Frame Race
Certainly not original, but the kids had fun using this game to review addition and subtraction. First we played on our large human ten frame. We took turns rolling a large pocket cube (labeled +1, +2, +3, -1, -2, -3). Each time students were either added or taken away from the ten frame. The game continued until we got to 10. Then partners worked together to play the game. I labeled wooden cubes to use with this game and quickly made up some game boards. Here is a copy of my Ten Frame Race game boards. I included Race to Ten and Race to 20.

Number Line Race
This is another great review game. We practiced playing as a group using a large "human" number line and pocket cube. The cube is labeled +1, +2, +3, -1, -2, -3. Two students modeled for the class, rolling the cube and racing to the end of the number line! They start on zero and go forward or backward depending on their roll. First player to reach 10 wins! Then, students played with their partners, using a number line game board, spinner, and car counters to play. The game board was inspired by The Teacher Wife! Click here for the Race to Ten Game Board.